This face is sort of the prequal to the Starburst Contemporain series. This was a design that I didn’t have a vision for prior to starting beyond the goal of including partial open works, not just a tourbillon. I just started drawing some elements, and it unfolded in this way. At some point I accidently turned of the blue plate layer in Photoshop and was left with what became Starburst Contemporain. I actually and completely turned my attention to that one, but then came back to this later. As I continued to refine it and try to get a date indicator in, the open-worked design took a turn towards echoing the aesthetics of the Contemporain look for it’s final form. But still I finished this concept and it’s got it’s own character I like too. So I’m just calling this one Concept A.

There’s a subtle white glowing lume in dim mode, and battery indicator in the window between 9 and 12. 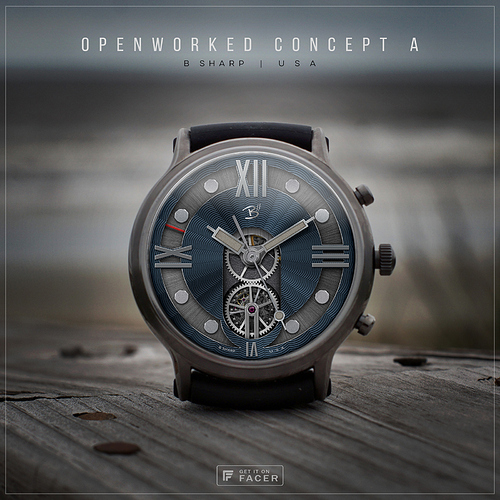 @safesz I tried hard to get a date in, that’s kind of how this one got steered towards the other version I published. I don’t like to slap a date window in if it’s mechanically unrealistic, so I tried a bunch of things with wheels, a few were cool but it made the design less focused to me. This version anyway. I think the Contemporain version looks great with the date, but there’s less going on with the windows. Maybe I’ll publish one of these with the date wheel for fun.