Strange that it got fixed shortly after I mentioned a couple of partners in the thread, but still scary that they could fix battery reporting to the watch from the phone app without any app update to the phone.

How are you using #LAT#? Do you use it as part of an expression or as a standalone tag? If you are using it by itself you could try multiplying it by 1 to see if that will change the type.

If you have not already done so, the Facer guys are always very keen to know about any bugs so it would be good if you could raise a bug report via email or the help system.

as standalone still work as text, as part of expression doesnt work on app 6.0 -phone and watch beccause i reinstalled the working previous version on phone 5.18 ad work, but cant install previous version on watch so now i see it working on phone app as in browser and editor but watch dont work i post a example screen editor shot fro show#LAT# use 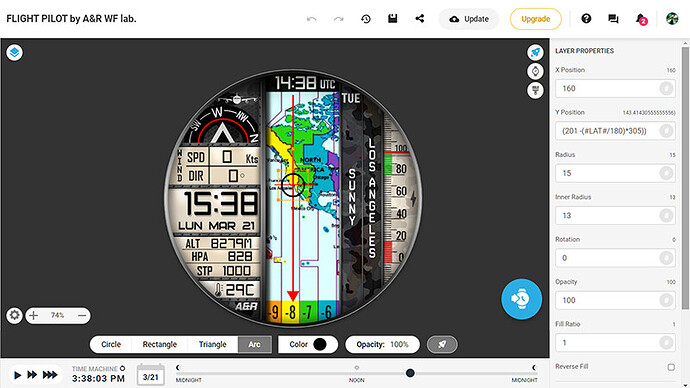 I’ll start using the web help once they unify the credentials with the rest of facer. I did report the battery issue via email.

I think that the reason the layers are not displaying correclty is because you have two syntax errors in your expression:

These syntax errors will cause the expression to fail on some watches.

Sir thankyou very much, i correct the expression and yes it works on watch to now:clap: but still a mistery why all my old faces has this same synthax error , thing that i’m sure they haven’t since i used them alot and have more than 8k syncs medium per face and no one encountered that problem , i just edited some now to look into and dang all with that error except the draft duplicate , pratically the pubblished have that synthax error but draft was correct , super mistery…

Looks like the battery info has stopped working again.

Looks like the battery info has stopped working again.

Yes, the phone-battery info isn’t getting updated for me either (Tizen watch, Android 12 phone). If I reinstall the Facer watch face on my watch, the phone-battery percent gets updated initially, but then remains stuck until the next time I reinstall. I’ve tried all the suggestions in the other threads for this problem, to no avail.

Yeah. Looks like the phone compannion can’t report your usage to the Facer servers again, causing it to fail before it reports it to your watch.
You don’t need a watch or phone app re-install to do the one off battery status update. Just sync a fresh face to your watch from the companion (not tested from PC but also probably works as I guess it will use the companion app to send to watch).

I thought it was pretty funny when after working all day, phone said 65% but watch said it was

This is one of the reasons, why I keep repeating: if its not broken, do not fix it and refuse automatic updates.
I wished they fixed my battery consumption problem one day, but seems like there are more impotant things to be fixed first.

There were no updates to my facer companion app between the one that broke it, it misteriously fixing itself for nearly a day, then breaking again. I also do not allow automatic updates.

This is not an app issue, it is a communication to Facer server issue. They must track phone battery stats on their server and if it cannot connect the battery reporting falls over and does not report to the phone.

OK, maybe an app issue that they changed the app to use a URL that is not reliable yet.

Interesting, I have never heard that a face, watch or phone communicates with a Facer server. I thought that faces are standalone apps that are loaded to the watch via the Facer App and then communicate with the watch, phone and at least one data service ( Open Weather ). Other than the strange behaviour of the phone battery data not showing up or being old/incorrect, is there some other reason why you think faces/watches are talking to a Facer server?

I have never heard that a face, watch or phone communicates with a Facer server.

When the phone-battery-level feature is working properly, doesn’t the information keep updating on your watchface even when your phone has no data or WiFi connection for a while, and even if your watch has only a BT connection? That wouldn’t happen if it depended on a “Facer server”.

Watch 4, Android 12 phone, latest software, and my Facer watch face still does not update the phone battery level except when once when I install the face.

EDIT: It’s now updating maybe once or twice a day, but no more than that. On the phone, the Facer app’s battery use is set to Unrestricted, and opening the app doesn’t result in updating the phone-battery info on the watch face.

@Facer_Official is aware of the issue and are working on a fix.

Hi @mrantisocialguy
Thanks for the reply. Yes, I had read in other posts that they were working on fixing the bug.
It seemed to me that someone was asking what kind of watch / phone we had, so I described my hardware
Greetings