Hi Guys,
I’ve seen similar threads that related to text layer being offset (aligned to its bottom instead of middle) so I hoped to find an answer there, but my situation is a bit different.

I won’t describe what the element of the face looks like, instead, here it is

I would like the text layer to follow the red triangle day marker, but since text is aligned to its base, the whole thing is offset slightly higher up. And if I try to counter that offset by changing X and Y origination points, the whole thing starts to move separately from the triangle, changing distance from it.

I won’t bore you to death with what I’ve tried, I simply failed at resolving this so would be greatly thankful if one of you encountered this before and managed to find solution for it, and decided to share the wisdom

If not, I’ll just cheat my way with seven text layers turning on/off as the days change, but still would like to find an elegant solution to it before going full savage

Thank you in advance!

Hi, try increase the angle for the date text box. For example put 63 instead 60 in its x and y formulas.

I just checked this out and it’s a simple fix by just playing around with 2 things ok.
.
First, put a 357 Rotation on your weekday.png, here -
. 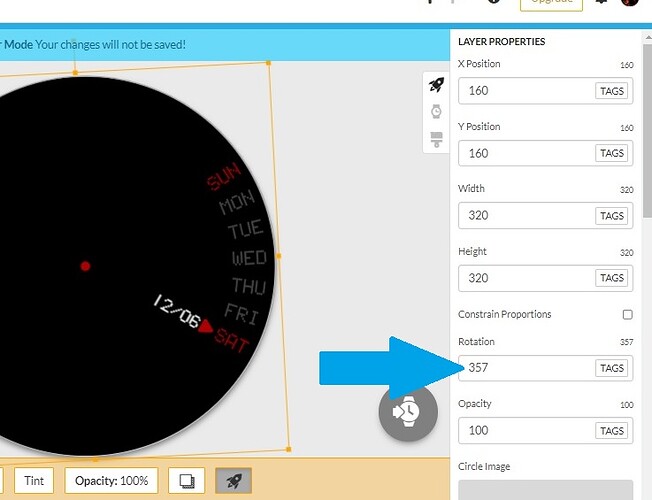 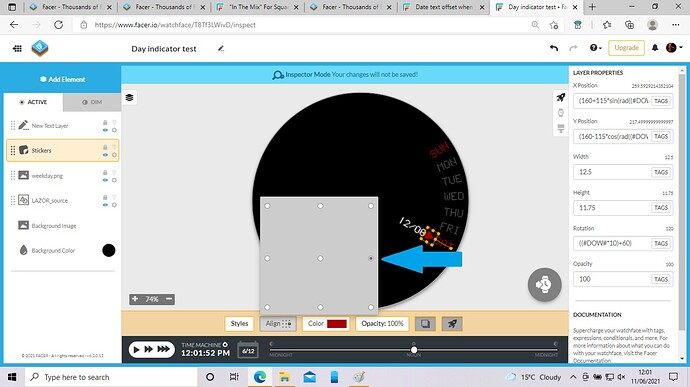 It’s funny that you both offered pretty much the same solution, just on different elements!
Anyways, I gave it a shot and that simple 3 degrees adjustment works in both cases

Off to another challenge, but that’s something for separate thread, I believe

Once again, thank you both for taking the time to investigate and respond

Your reply came just a minute before I commented

You’re most welcome akar.zaephyr, lots of helpful people here in this awesome Community, and I’m still a noob myself, my Math sucks big time

Good luck with your other challenge

I am glad to help. But often before I manage to compose my answer (my English is not very fluent), somebody posts better formulated solution. This one was simple.

It was so simple, I forgot that the rotation of the text is handled separately hence you can add a few degrees to adjust position. Thank you again, I have incorporated this very rule into what I was working on:

Need to keep in mind sometimes simplicity is the answer.
Cheers!