How to submit a tutorial

I wanted to give a simple outline of what a successful tutorial looks like. Tutorials can come in two formats: video and medium article.

post all tutorials here and they will be considered for our medium and featuring.

thank you for correcting and publishing of my tutorials about the "Bouncing watch hands" and “Snow Flakes”.

In the last few weeks I prepared a number of new tutorials which possibly could be also interesting for your designers, followers, creators and readers. Today I transferred some of them to the “Medium” and here are the links.

It is a mix of simple (battery level - most popular at the facer community) and advanced (light reflexion) tutorials depending on effect.

can you submit these under Facer pub? Would like to add some banners and publish these as well. great job!

Hello @Lukasz, what do you mean with “Facer Pub”? The official community? I do publish the tutorials (and more) first at the facer community website:

Here is the tutorial about Temperature Line Chart.

Is this what you mean?

Sorry, that was a bit vague. I meant submit them to the Facer Publication on Medium so we can make a few minor tweaks like adding banners and stuff

Hello @Lukasz, know I see it more clearer, however I do not have idea how to submit Medium article to Facer Publication.

2 - I got an email from @ariel per Medium 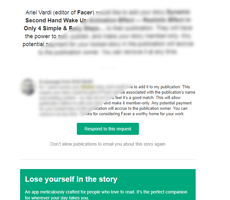 Is there also another (easier) way?

we added you to the publication since they removed ability to request, please follow these steps: Add a draft or post to publication – Medium Help Center

Hello @Lukasz, thanks! I added all of tutorials to Facer in a minute ;).