Here’s the back story that people outside of America may not know. Our “president” is so disliked now that people at sports events are joining together and chanting “F*** Joe Biden”. At a NASCAR race the crowd was chanting that phrase while a NBC sports reporter was interviewing Brandon Brown who had won the race. She said to him that the crowd was chanting “Let’s Go Brandon” instead of what they were really saying. That quote is now the “G” rated version of the Biden chant. So I HAD to make Let’s Go Brandon to celebrate the new chant!

The watch face displays “Let’s Go Brandon” every ten minutes for one minute then turns off until the next ten minute mark.

Very clever! Now I get it! Thanks for the explanation. My son was at the race. He sent me a phone video with that title. I couldn’t figure out what he was talking about.

It’s a nice Face regardless of any Presidential preferences, and I’d love to comment more, but this is a Watch Face Community, so I’m not going to start a Presidential debate.

We currently have the worst illegitimate president of all time. God help us.

Thanks for the anecdote

And praise for the prompt and witty reporter

Nice detail, the clock on wall, but is visible only on square watches.

I was doing the face rather quickly. I noticed the wall clock issue, but didn’t take time to fix it. It’s going to be a few days now until I publish it so I’ll see what I can do with the clock to be more round watch friendly.

UPDATE: I’ve altered the picture and uploaded it to the watch face. I’ve made it so the square version clock is where it was, but in the round version the clock moves down and to the left so it’s almost completely inside the face. Switching from round to square face you can see it move.

Hmm, it’ll do I suppose

I was hoping this site would stay fun. Nope -

What’s not fun about it?

I don’t understand? It is fun

I agree, I mean, I’m having lots of fun! I imagine I’ve offended someone’s political beliefs. Oh well, I don’t use the username Mr. Antisocial Guy for no reason at all…

I thought I could come here to avoid the political bull$hit. But nope…

There is surprisingly little politics here. But on the other hand, I have been ravagedly attacked for a couple watch faces I’ve published. I’ve been called a racist, homophobe and several other slurs in the public comments that I can’t stop or delete. My momma taught me that if I couldn’t say anything nice not to speak at all. I respect the fact that people have different opinions on various subjects such as politics, religion, nudity, sports and a lot of other subjects. I have yet to make a comment on anyone’s watch face no matter how much I disagree with it and them. I do not like Joe Biden, but on the other hand, I’m not going around yelling F***J.B. That is attacking his person not his performance.

I posted this face because I thought it was funny how the NBC race reporter mentioned the crowd and obviously tried to misquote the crowd’s chant, that was clearly heard in the video. You should look up that video of her after race interview of Brandon Brown and see for yourself how much of a lame attempt it was to cover up what they were saying. THAT is the point of this watch face.

I’m sorry if it offends you, but you need to take a place in line with the rest of us who have been offended by someone or something. I’m sure this won’t be the last time for either of us.

I think it’s cute. Most of us have fun at this site. If someone is offended that’s their problem ← they are the ones who are turning it political by calling it out.

There are a lot of things that offend me on this site and this is NOT one of them. Some people that swing to the left are easily triggered. Let’s go Brandon!!

I agree with you on this. All the nudity in some of the watch faces offends me, but I don’t comment on them. I figure if that is what they want to be known for doing, they have the freedom to do it. As long as Facer doesn’t censor them why should I? In the end, I’m only responsible for the things I do, not anyone else.

I thought I would end this in a meme. Especially how I seem to have the ability to “trigger” people who don’t like my views. So here’s a meme I just created for other uses, but figured I’d put it here. 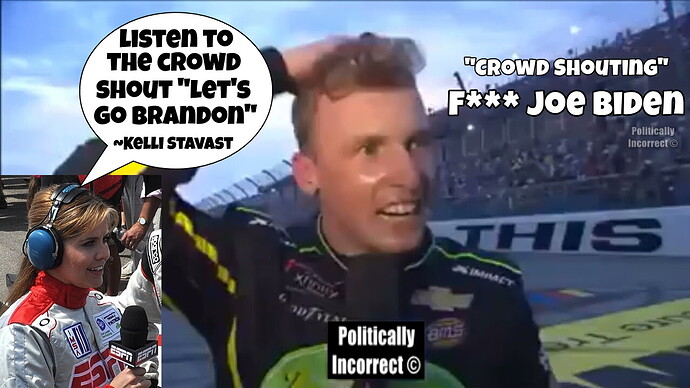