Preview has no drop shadow, installed it does (2 examples)

I’ve noticed on several faces that, once installed on my GW4, have a black drop shadow that doesn’t show up on the web preview. It makes the faces look wrong and they’re hard to read. I enabled and disabled High Contrast and Bold in the display settings thinking that might be a factor, but it’s not. What causes this and how can it be fixed? 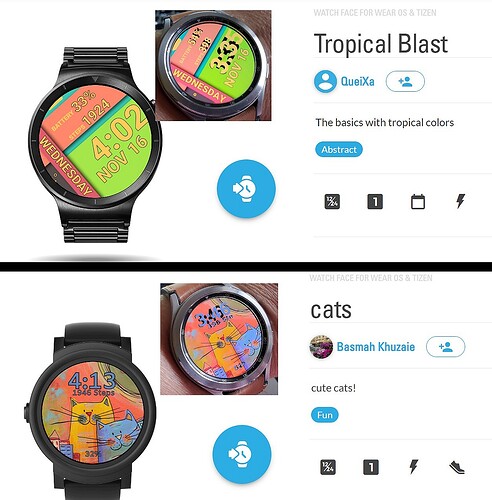 OK, here’s your answer. Your GW 4 watch runs WearOS and the people who made these watchfaces added a stroke around the font. You can see that as a black outline around all the text in the preview. They did not know better and added something that WearOS is not compatible with. All watchfaces that have an outline around the text that is used whether it be in the time display or anywhere else will show up as a second shadow text behind the text. Most creators here on Facer who have been around a while know to never use the “stroke” or “glow” text because WearOS behaves badly when it’s used.

In the future to avoid this kind of an issue, just avoid any watchface that has glow around the text or an outline. I didn’t realize that was your problem until I synced the Tropical Blast watchface on my GW5 Pro and it showed up immediately. Fortunately, both watchfaces had inspection mode turned on so I could see how they were made and confirmed the stroke effect use.

That makes total sense. Thanks for the great explanation. I’m a little bummed since the preview version’s font effect is so easy to read.

Will you do your best to make the Makers of those faces aware of the short comming. They will be pleased to get your Shots in thier comments. Most will be ready to make the changes for the New OS.

This makes me question where is the flaw. We have a feature that is broken on half the platforms for years and still present in the creator. Is it bad implementation and we can hope for a fix in one of next betas, or is it due inferior OS and we should give up hopes?

They have so many problems across all the watches and OS I think Text Glow and Outline are way down the list. Still it is good we have some brand new Tags and Expressions to make things more complicated. Makes you wonder why R. I. S. C. was so sucessfull. Some say we would not have Mobile phones if it were not for that.