Warning, here’s another nerdy post. If it’s not your thing, skip to the end.

I’ve done a few of these abstract models of the solar system and put it on a watch face. Here is another & I don’t expect this one to be popular, but for me it’s fun to make and maybe some nerds out there will like it. While it’s not accuarate to scale, it’s quite accurate to current current time & actual polar location. I was inspired to make this from a similar, much much nicer version & amazing version by @mikeoday - hope you don’t mind me expanding the concept, in this crappier version?

Cellestial Bodies
This watch face accurately shows the current location of the moon & sun relative to your location on Earth.

It also accurately shows the current location of all 9 planets relative to Solar North. (Yes, Pluto IMHO, is still a planet)

The earth view is a top down northern hemisphere view of the earth. The illuminated part of the earth and moon are accurate to the tiny sun location (not to scale) at the top. Your location is graphically shown at the intersection of the red longitude and latitude lines. If the moon is within view, it will be in the lightly shaded visible zone. Moon age is shown within the moon image. If you imagine standing at your location in the model, the moon will accurately show it’s current real phase.

The outer ring of planets is angular/polar aligned to solar north (not to scale, but at the same astronomical unit scale) - so it isn’t aligned to your perspective on the earth, the same way that the sun and moon are. (Note: If i were to keep the Sun/moon & Planetary models aligned, I think I’d need more of an iterative converging model using planetary ephemeris data that I don’t think the single expression window in a Facer Creator object can handle.) So, for the planets in the outer ring, imagine you are looking down upon the solar system from the top down, with Solar North up. Similar to the below snapshot from theplanetstoday.com, where this is all calibrated. 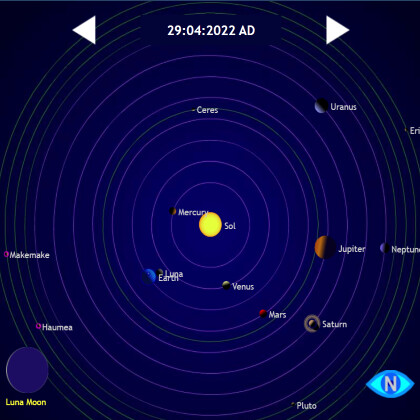 Sunrise and sunset times are shown at the terminator lines (shadow/umbra day/night interface on earth).

For fun, click on the triangle a couple of times to make it 3 triangles, & speed up the model. You can see the moon orbiting around the earth into/out of the horizon (where the horizon is in the visibile window shading) from your location. Most of the moon motion at the user location point of reference is really from the rotation of the earth, while orbital speed is rather slow to see. Mercury’s orbital period is fast enough to see as well. The other planets are too slow to tell too much. Check back in a month, they’ll be at different locations.

Also for fun, note that many of the planets are at the same side of the solar system right now. This rare occurance is pretty cool to see with them all lined up in the sky.

Note: Model of moon is good until Spring 2025. After that date, if I’m still kicking, I’ll update it. All planet and moon data calibrated at theplanetstoday.com.

Monster face , fortunally isnt inspection open , my brain would have burned looking into

i’ll go to test it

Always amazing work from you my friend, well done

Very cool! Would love to inspect that (hint hint

Ok sure, I’ve opened it up for inspection. No problem. There isn’t really much new in there from my tidal forces watch face, except for the planets & rearranging things. Maybe a few arc formulas? I also want to give credit to @Mellin for opening up one of his faces a couple of years back for inspection which is where I got some of the planet rotation formulas from.

I’ll do another version next week with the sun in the centre, planets same as this face, earth/moon accurately represented as big as practical in between…

I am looking forward to having a Look under the covers of your Celestial Body .
This Topic is bookmarked for Future reference . Much Appreciated . True Spirit of the Community .

That is great, well done!

Ok sure, I’ve opened it up for inspection

Thanks!
Looking at it more closely, could it be you have the images for Uranus and Neptune swapped?
Most images / icons show Uranus in the paler blue (often with rings) and Neptune in the darker blue (usually without rings)

You know @ThaMattie, I think you are right! I just went with the stock images I was provided, so I’ll blame the source and my poor quality control. Thank you for your keen observation. I’ll switch them around.
Edit: All fixed.

Utterly COOL and SO Creative!