[Watchface] I've Got the World on a String - black

here’s a black version of this travel watch. Apparently the full title uses the max characters allowed so I had to shorten it in order to add “black” to differentiate it from the original blue version published earlier (apologies to Mr Arlen and Mr Koehler). At some point these will both be selectable themes within one face with an adjustable 2nd time zone. Until then enjoy this free release which looks great on any smart watch!

Follow B Sharp here on Facer to never miss a release, and on Instagram:https://www.instagram.com/bsharpwatches 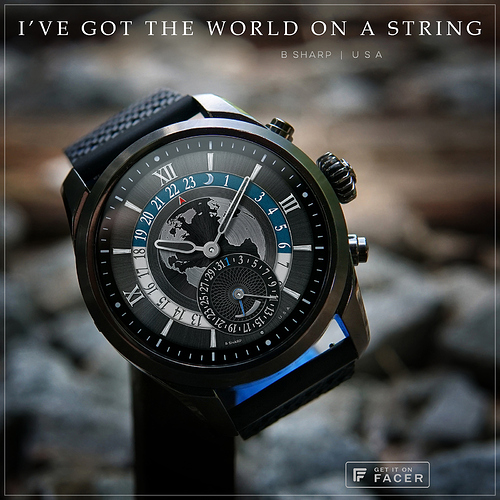 Just a passing thought - You could do the whole world, place is a long graphic (needs the world twice - one graphic) and place this as a lower layer (moving right to left) match to 24-hours. Then global mid-day would appear in the middle of the map / watch-face. See the 3d globe on my Apollo II (see at ‘3’).

Sorry - meant graphic moving (linear) left to right… made that mistake before!

There are a few watches that have actual 3d spherical earth or moon rotating on an axis, but that’s not the effect I was going for here. At that size, in the center of the watch, under the central hands, it’s completely mechanically impossible. That’s fine if it’s what someone wants to do, such boundaries don’t exist on a smart watch face. But mechanical realism, or at the very least, reasonable plausibility

, is one of the pillars of my concept for B Sharp.

For me the central globe here (a familiar travel watch element seen on dozens of watches) is more decorative and symbolic. I imagine it more as something where a master independent watch maker would showcase his engraving and finishing skills. which is again where I strive for the digital equivalent of that to be one of the defining pillars of B Sharp.

no worries Rich, you know I’m always happy to talk about this stuff

Phew, thought I was off your xmas card list…

If you don’t get an Xmas card from me this year it’s not because you’re off the list, I’m just terrible about cards!

Looking good, I think I prefer this one over the blue one.

Thanks Mattie, I’m torn myself. Usually I have a preference but this time it’s a split decision.

I also prefer this over the blue one.

I wear mostly my own designs. Not even a fan of most of the premium designs. But I love your designs!

Thank you @wsilbers , appreciate you saying so!