Who's up for an unusual watch face challenge?

Here is a challenge for all you creators out there.

This challenge is for no reason other than I would like to see what the great Facer community can create using the (rubbish) watch background below: - 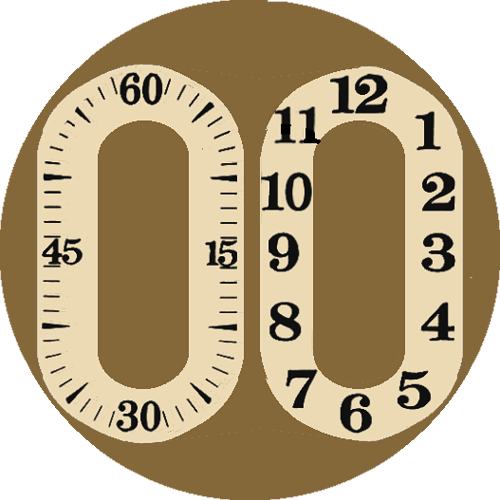 I would gladly try it later. Meanwhile check this face, it might have some clues.
I think there is more, just did not find them so fast

It is not polished yet, but did you mean something like this?

I was thinking Mercury Thermometer style. I forgot about the Sissor hands. They might look a little lost on there. Not really neede any way.

I’ve got to say, I am impressed! I would have never thought of doing it that way, and I darn sure don’t have the math skills to accomplish it. Bravo!

This looks like a fun challenge, thank you @yaskinforrit for getting the inspirational pot of water boiling. I’m interested, but it will probably be several days out as I have lots on my plate right now.

There is no time limit here, I just wanted to see what the great Facer community could create based on an unusual face design

My first thought was a full-blown antique style regulator watch, but I’ve been struggling with it…

The dial’s existing spokes placement is fully linear, which for an oval dial will not work using a standard mechanical hand rotation (see spokes image). But it does work perfectly well with @petruuccios’s linear movement, which is genius.

I thought I’d go off on a tangent and try non-linear radial spokes (that is, non-linear in how it “looks” on an elongated oval dial), which has its own issues with both minutes and hours given the height of both ovals versus the length of the hand. So… here’s what I have so far as an antique-styled regulator watch with antique blued steel hands-- plus an added seconds hand and seconds dial. 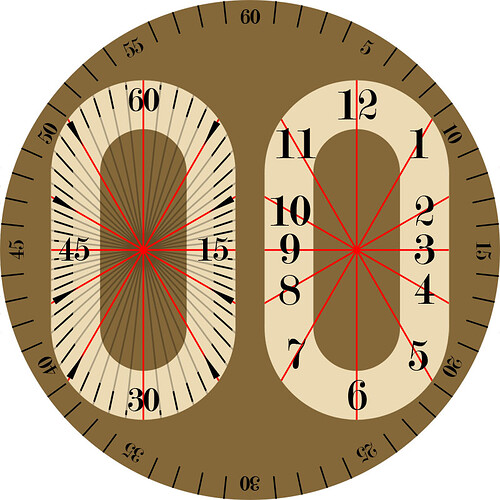 I Really like @petruuccios’ approach as it adheers to the unusual approach. The vertically moving central axis until rotation needed at the ends.Job done there.

I also applause doing one part to demonstrate and leaving off the to show it is a demo model you need to completete youself, but feel free to ask in the comments.

I was thinking of joining in with a trianggle marker that went round the edge but no need now.

I really thught you might be Mr stretchy on this one after your squar/round job that was awesome.
OK, and I saw scissor hans mentioned later (and No, not them).
You do have the maths though for exending the hands, from a central axis, to rfollow the outer face of any dimntioned rectangle.

Stll think Peter will have it nailed with the center slidig point.

Thanks for your words guys, actually, I was about to finish the example into a fully working face that I could publish. But then realized, I would not be satisfied with the background (the original ovals are not same shape, the numbers and scales are not eactly linear), without making it anew from scratch, like @kourosh did (I like the blued hands and font a lot). And that would take me too long, for it to remain funny.
So I decided to take a break for now, maybe trying again during weekend.

feel free to create your own background and publish a watch. I did say mine was rubbish

My impatience won again. I already published it

I am still not satisfied, but probably wont do much changes anymore. What annoys me, is the face preview in phone ap. In creator and on site everything works, but for some reason one of the second hand segments does not show in the phone. I used same logic in the opacity. No idea what could be wrong.

Wow - great watch face!
I noticed you swapped the dials (your way reads better and looks better). I also love the battery gauge and the date.

@petruuccios . /i made a quick test with your code and checked it out on MY DESIGNS / Watchbox . Obviously no problem . I wonder if you should try just republish . You Would hope that there are not too many #Dsm# for the system to cope with . I like your very creative way of crossing the Zero.