I’m trying to switch between a round battery progress bar for round watches, and a flat bar one for square watches, using this conditional and it’s variants in the opacity field:

It outputs 0 whether or not it’s true or false, both in the creator and on my watch. The tag itself is outputting correctly, and i have also tried reversing it (changing “true” to “false” and switching the then/else) to no effect. I’ve had issues with conditionals before, but i supposed it was due to having multiple in the same line; I’d hoped something as simple as this would work.

That fixed it, thanks! Don’t know why i didn’t think of that.

That is one of those once it bites you in the butt, you remember it items, don’t ask me how I know…

I would have ended up in the same loop of confusion, seeing as how their own documentation shows this tag’s “sample output” as uppercase!

You know when you are becoming an expert. You are Debugging the Manual. Sadly Facer do not update the Documents. I would be good if @Facer_Official scanned these Conversations.

Language, LANGUAGE!
Actual packing list from a shipment we received, from back when I was still working for a jewelry company: 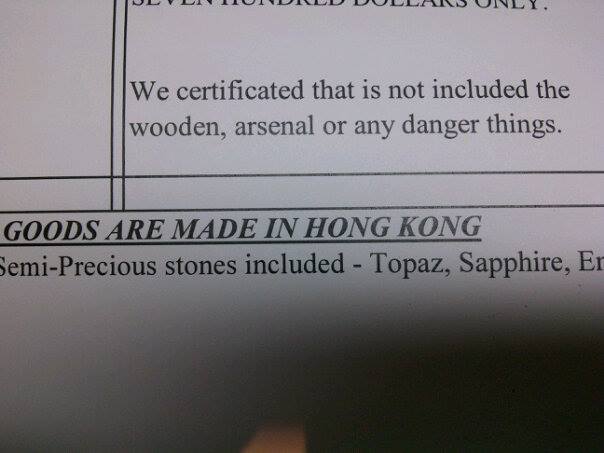 Classical Chinglish in its purest form.

Years ago I was trying to do some Assembly Language for the Chip on the Psion Organiser to access the parallel port . Motorola I think. Point is I found two errors in the Manual bebore I got anythigng to work. That was my olny forray into Assembler. Back to Basic for me. OH and then ther is Facer. I still dnot know what the Code is called that we use on here.

I vote we name it “Gibberish”!

Yup. I will go with that . Samsung and That Watch box have their own . They are similar but Different . So they are all Gibberish .