Need this - SHOW YOUR HUMOR!

Got a funny face you have got to show? Something that tickles your funny bone or is just silly or a play on words or “numbers” in this case? Whaddya got? ALL FORMATS WELCOME!

Here’s mine. Sadly, since the last Facer update the hands no longer functioned like they did so I had to update it so they would at least tell time. The hands used to start at the 12 o clock position and spin down to the correct time. It was my take on all the Micky Mouse watch faces on Facer. I knew better than to make one of those, but one of myself, who’s going to claim copywrite infringement on me about me.

This is a Face I published just after having one taken down because it had the word Zenith in the Description. I used the word to describe the high point of the Sun’s journey through the sky.
Vantablack is a trade name for the darkens Black ever. The rights to it were purchased bycAnush Kapoor and he protected them to the exclusion of it to another artist who responded by developing the Pinkest Paint on the Planet and Banning Kapoor from using it.
Obviously Marvin the Facer Bot was blissfully unaware of this Copyright Spat and has not taken it down yet.
It is actually quite a nice Watch but you have to sync it and lify your wrist to see the detail. It has had about 40 syncy in a year or so. Ha Ha.
PS you can simulate the reveal on the Phone App.

Thank you for that rephrase, we wouldn’t want anyone getting any ideas about you.

It seems one idiot already has got crazy ideas about me, but I’m hoping it’s all being dealt with properly now

I redraw an old joke before Easter but it wasnt very popular, maybe too dry.

@petruuccios
“I redraw an old joke before Easter…”
I love this one, it is one of my favorites!

@mrantisocialguy
That face is adorable! It looks just like you!

@russellcresser
Unfortunately, I can’t see anything on the Vantablack #02#

It looks like a completely blank face to me.

Well, most of you already saw this… the metroGnome that became the first metronome while I was still working on my music face. He seems to work better being in front of the hands. And… he reminds me of Travelocity’s TV commercials!

he reminds me of Travelocity’s TV commercials!

YES! THAT is where I saw him before!! I thought he looked familiar!!

just because you know someone that can remove my comments instantly doesnt mean that when the whole topic gets taken down and reviewed properly you will have a leg to stand on. Thats why Im still here. Not liking your faces. as they are lame boring and lazy and so is flagging my comments that dont S your D.

further more you should be banned for abusing the system and using “marvin” or whatever your helper is to flag and remove comments instantly with no review process. ABUSE OF POWER IS BULLYING @Facer_Official @facer30 @facer27 @facer9 @facer20 @facer5

@alwaysbusy4family . Please try, for me, to preview the Vanta Face on the phone app. If you hold the phone vertical and tilt it up and down towards and away from your face you should see the trick.
Accelerometer stuff does not preview on the Web pages and gets confused on a tablet. Of course you phone might not have the sensor. It might be Gyro only. Please let me know which phone you have. IPhone I bet. 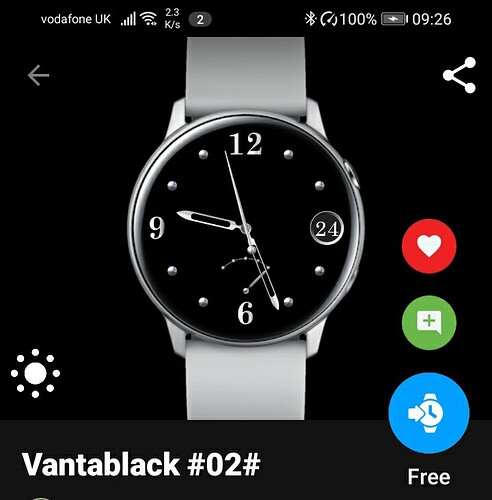 is that why you and “marvin” the moderator go around removing comments that you dont like?? and do it instantly without any due process to see if it breaks any rules.

it runs way too fast and is glitchy from having 1 too many or not enough frames in it. I have used the same gif in 1 of mine and cut out the frames that made it look bad like this.

background is missing frames and looks as messy as alien one.Thats why i say your stuff is lazy as it never has enough frames to make it flow

i dont and never have asked for forgiveness.
and dont take back what I say. I say what i think and think what I say unlike many people who hold their true opinions by biting their tongues.
I dont care about how many followers I have , I just showed a few of mine to show that people like my designs after people here were rude about them.
I dont worship the devil as I have said before , If you even look up for 1 sec what the Satantic Temple is youll find out that we dont believe in satan or worship it, we dont believe in GOD as its all stupid brainwashing and use HAIL SATAN as a joke to play on god people who believe the trash and lies that they do.
The fact still is my comments have been removed within seconds sometimes of posting them, which is impossible if they are not offensive to anyone. making this all a personal attack using a moderator as help .

I Have NEVER said “heil Hitler” and find it very stupid of you to make a comparrison of hail satan and heil hitler as they are NOT the same thing.
Hitler was a real person Satan an God are not.
I dont not believe in hell and my sense of humor is dark. I do not regret having a sense of humor , I regret living in a world with people that do not have a sense of humor.
I also think it is very immature to believe in something that is as real as santa, fairies, and unicorns

This post was flagged by the community and is temporarily hidden.