To dark-mode or not to dark-mode, that is the luminous question

But I’m seeing a lot of designs with their dark mode being a dimmed version of the normal display. To me, this is semi-dark mode as opposed to pitch dark as I explained above, and plus it will use more battery power. But on the other hand, you see some semblance of the dial.

Looking at this banana diver, which is the better AOD dark mode, 1 or 2?

My opinion would always be Dark 1.

I have to agree with @icrltd4 Dark #1 plus I would just not have seconds turned on in AOD mode.

to me Dark 1 doesn’t make sense because the non-lumed part of the minute hand shouldn’t vanish. Dark 2 works better for me. But shouldn’t there be a third option where the dark layer is at say 50%? Or even 80% if you want it dark, so you can still see a bit of the dial.

For the seconds hand… I used to not hide it, but based on comments, I think most people expect it to be hidden in AOD, so most of the time I’m doing that now.

Yes you’re right-- in Dark1 above, the rest of the hand underneath the lume is missing, so below it is fixed. But I don’t know what expectations the users have with AOD.

If I look at it from my current perspective of “vintage lumed dial seen in the dark,” then the background should be dark (black) and only the fuzzy green lume should be visible.

But if I look at it from the perspective of many other faces here where the dial is still visible, then some percentage of the dial/hands should be visible along with 100% of the lume. However, this whole argument being about AOD/Dark Mode, battery power will continue to be used, which is contrary to what I thought was my current taste/opinion. So in that case, I wouldn’t want the dial/hands to be that visible, certainly not more than 20%. Dark2 is at 10% in both above and below images.

My current personal taste/opinion is Dark1 primarily, and secondarily Dark2 with no more than 10% of the dial (and seconds hand hidden). But again, I don’t know the expectations of the users (yet).

I just looked at this thread again, but on my phone. For some reason, Dark2 in both images above appears as though it is almost all black, whereas the dial’s visibility in Dark2 on both my laptop screen and on my GW4 watch are easily 2x more bright than what shows on my phone, laptop/phone/watch side by side shot below. So there is a decent amount of the dial visible. 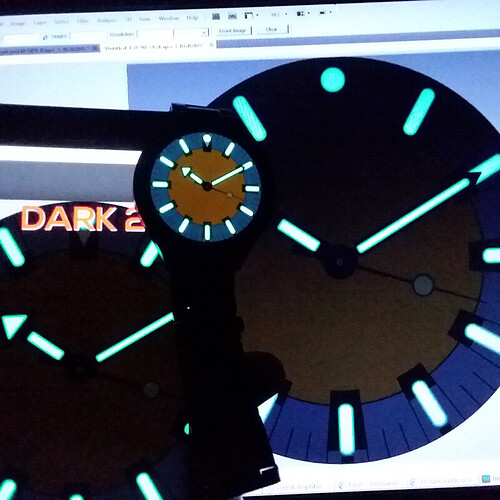 I like the dark 2 better. For a smart watch I prefer darker dials in general, so the difference to dim mode does not need to be so strong. For the second hand in dim mode, maybe you could try the 12 parking position with fast recover on wake up. I have seen it explained well here (no need for the wobbly effect).

correction of some rotation expressions) Hello again, I will show you an easy possibility to have a great effect you could immediately use at your watch face creation: Here is it: [image] Here are the four phases: [image] 1 - DIM Mode - Second hand is waiting in the “zero position” for action

Also note, that on bright dials the lume it self irradiates surrounding surfaces making them more visible. 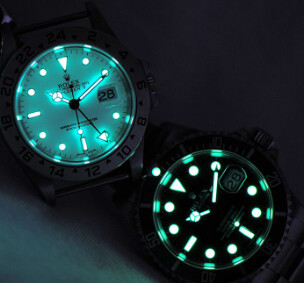 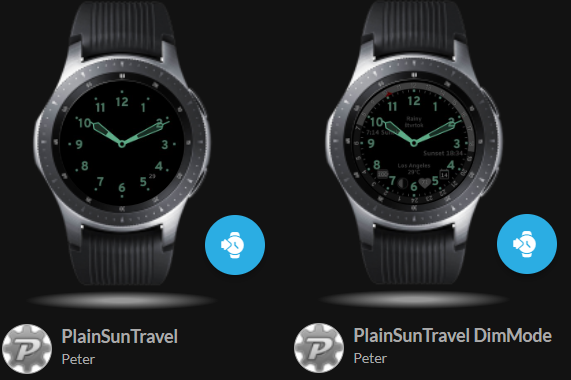 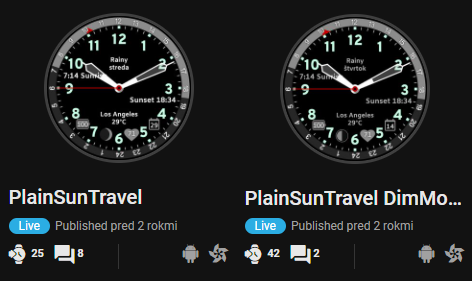 My Tizen Galaxy Active has two AOD modes. Dimmed and Classic. Unless the AOD/DIM Face is Realy high contrast I do not see enough to read the face. On my watch Dimmed is just a Dimmer version of the Main Face. Classic is the AOD/DIM mode the Maker has set to switch.
Seconds never work on my watch in AOD.
So to sum up the ramble I do not use AOD at all.
I liked 2.

I like nice dim modes, and I like it when it does indicate what the face looks like, but in some cases the background may flicker (maybe not all watches, don’t know), then its probably a bad idea.

For the second hand in dim mode, maybe you could try the 12 parking position with fast recover on wake up.

That’s a good idea, I like that. Here’s a test with a variation of Dark2:

The trouble with AOD in general: it does not work right. Most of the time when the display times out, it just goes blank. Only once in a while I get the dark mode AOD screen with my precious fuzzy green lume.

I notice on the Test above that your Second is still there and causes a shadow over the Lume hands . I would just dismiss it . It will never work in AOD / DIM mode .
You can still do the beautiful Un Park after Wake . Just put the second back at 12 on Wake then Un Park it . 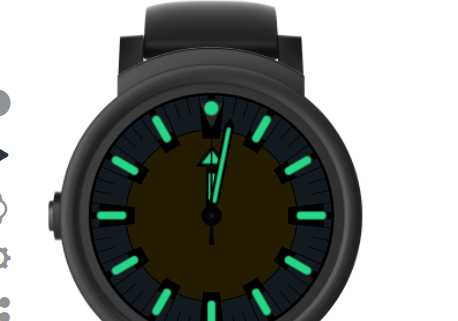 Yes the seconds hand is there, but parked at zero with zero rotation. It sits above both hours and minutes hands, which is why it would cast a shadow on the other hands. Is that what you meant?

I was under the impression that nothing animated works on the Dim display, including a Seconds Hand.

The minutes hand does work in AOD, at least on my GW4, but it only updates once per minute. I haven’t been patient enough to keep still looking at the hours hand in AOD, but I presume it also updates accordingly.

Edit: make that on both my GW1 and GW4, minutes hand does move on both in AOD.

I did see, the seconds hand is doing what I intended for it to do, but I’m not following what you mean…

Generally, all WearOS watches flicker in AOD mode. I’ve gotten several complaints about that, and it is always someone with a WearOS watch. My Fossil test watch also flickers in AOD mode along with my GW4 Classic, but my Tizen powered GW 1st gen does just like @russellcresser describes. OK now that being said, this is what I generally do, and it gets the least number of negative comments about AOD mode. I set up AOD being white or grey tones with a black background. If I am doing a watch face that has a picture in it, I use Paint dot net to turn it into a black and white picture and use that at 70% opacity in AOD and the color one in active mode. The only comments I ever get now, and that’s very few at that, is that they want the full regular watch face in color in AOD mode. I might get one or two comments like that a year.

The bottom line is this, do AOD how you want to do it. As long as your end users are happy, who cares.

Well, for now AOD is the way I want it (for now… I think… maybe… kind of… who knows!), but once I start publishing we’ll have to see what users say. Bet the first thing is “why is the seconds hand not moving in AOD?!”

But either way, I still don’t understand what the issue is with the screenshot above.

Also, I’ve not noticed flicker in AOD, either on GW1 or GW4. My only issue with AOD is that it doesn’t always work (on either, display just goes blank after the timeout, even with “always on” enabled). Under what conditions are you seeing flicker?

Bet the first thing is “why is the seconds hand not moving in AOD?!”

Yep, and you know it is a new Facer user who is asking that too. On the flicker, I think it also depends on the watch manufacturer. As for the AOD not engaging, I’ve not seen that, but what I do see on all my watches is even in AOD mode it doesn’t stay on always. My Fossil especially will go into AOD then after 15 to 30 minutes it’s totally off. If I wake it up it goes through the same pattern every time, AOD then off.

@kourosh . I was just trying to say the second Hand shows sitting above the Hours hand. Just an observation. I have no problem with it at all. As I said I never use AOD. I often make the AOD with the MAGic specs.