An idea for blending colors to make digits. Not sure where it is going.

I’ve stolen the font of the digits from akar.zaephyr and this is a continuation of a conversation started here

All and any ideas are most welcome, and everyone is more than welcome to take my idea of blending colors any way they want.

I shall get around to changing the font.

Oh i love this!

@rasmusbak.jepsen Will you kindly open your Test Up for Inspection , I love the way you move you number Disc . I am jus getting my head round what you have done . I have tried to do colour mixing things before . I did not know that combinations of CYMK and RGB made grey . I say a Lot that Every Day is a School Day .

What a unique idea!

@russelcresser The watch wasn’t published, I’m guessing that is why you couldn’t inspect. It’s published now.
Mixing colors with transparency is fairly straightforward, though I can’t remember the formula. But if you blend FFFF00 (yellow) with 0000FF (blue) alpha (transparency) 128 you get 808080, so half of each channel. If the overlay is in the channel that is missing in the background, it turns gray.
Mixing the CMY with red for example gives

This is all with an opacity of 50, changing won’t give the perfect gray, but sill gives interesting reults.

I actually came by the idea by watching ITV, they have a really cool logo using CMY. But in that logo they use additive blending, which you can do in your graphics program, but not real time. I then tried various ways of making it work somehow on a watch, without luck. But then I saw Akar’s watch face and things came together.

And writing the conditional for the rotation took me longer than I am prepared to admit.

I seem to have hit a max amount of posts for a newcomer, I’ll have to wait 3 hours. But as an engineer, the code is actually the easy part, the creative part, making it look cool is much, much harder.

I’ll be back in three hours time.

Oh. I should have said. You do not have to Publish to Make your work Open Source. I am not on my Laptop at the moment. I try to discribe the process.
At the top of the Creator Window there is a Sharing Icon. That takes you to the Link generator page. Use the upper of the two links an make sure you have switched on the Inspectable Switch. This puts the link into the Clipboard and you just paste it here. It is my Favourite because it gives a nice Preview. Most learn very quickly that you click on the Face Title to get to the Preview Page wher the little Rocket is shown.

Thank you for bringing this stunning effect to us. I made a quick bit of code for rotating your wheels but it did not have the smooth move so it looks like S… So I am looking forward to seeing you hard won Code. For a lot of us code is not th e Easy bit. Thank God for Copy and Paste.
Sadly the creative process is a bit subdued at the moment responding to the recent news in the UK.

I wonder how you managed to get your 11 segment Numerals into a wheel so accurately. 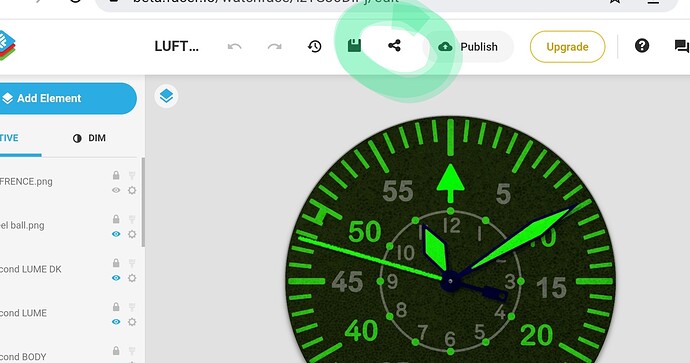 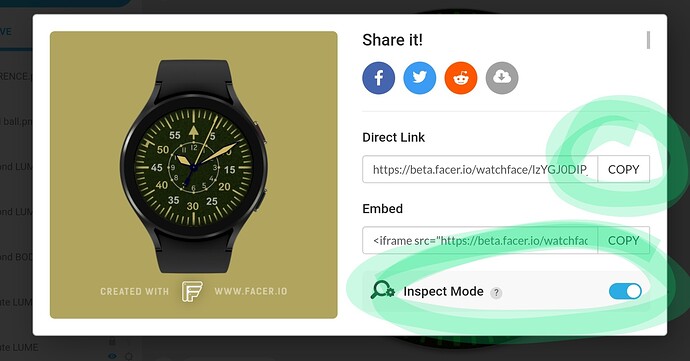 So I see your mix up trying to use Comments as a way to communicate. I only put some cooment t
here to compliment you. I could have put a wrist shot. But I have to Ration those. I am wearing out my watch with Syncs.

Regarding the Second comment about HD animation.
This is a link to one of the animations Andrei did.

That is extremely cool! I’ve cooled on the idea of sequences though. I did want to make a background with the shimmer of oil on water, but interactive somehow, so it changed with the movement of the watch. That idea did not get off the ground.

Trying to make the wheel go into the plane of the watch, this might work. Hell of a lot of trig involved…

Post the upper link . Can you not reassemble you 11segment numerals separately off the wheel so you do not have to use Trig . You are obviously not frightened of maths .

I’m pretty sure there are a few errors in there, something looks off.

Using this for reference

It’s -150, the opacity can be negative, it will just read as 0. I just wanted it to fade out quicker. But I think I should use something different than cos to the angle, maybe the angle itself. Not sure just yet.
And once I get it to look nice like this, I have to put it into the conditional of my other example so it only turns once a second, minute and hour, over maybe half a second.
I was thinking that I’d put the red overlay over the hours, the blue over the minutes and the green over seconds. Or maybe change them, not sure. But I’m guessing the colors are going to be all over the place.

Cool well done I see it . 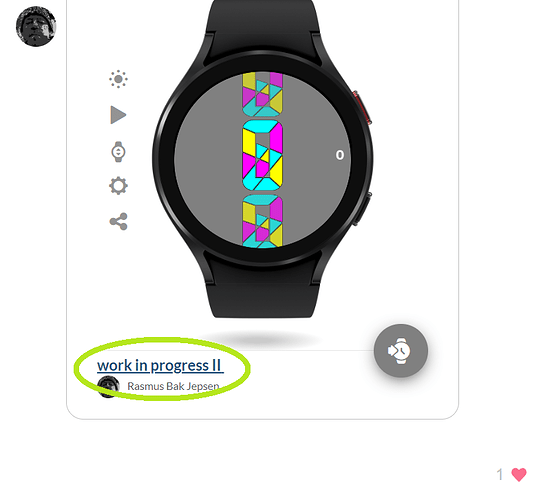 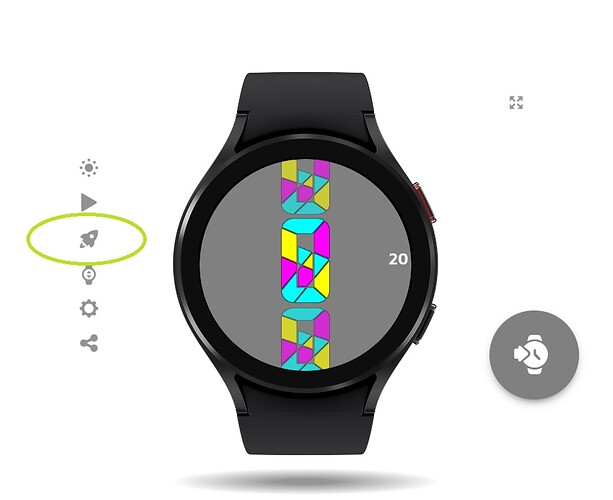 This is where I have got to . Thanks for posting your work Open .My brain is Boiling . I think a 0 to 9 wheel would be cool but at this stage in the game I have a cats chance of sorting that . I am still getting my head around how the filters work .

that looks very nice, cool concept!
I think having both wheels turn at the same time looks best (like in @russellcresser 's example)
You could have 4 * 2 wheels spinning for the time

My problem with both foreground and background changing is that you’ll have multi colored digits, that change colors all the time. Think it’ll be a bit hard on the eye. 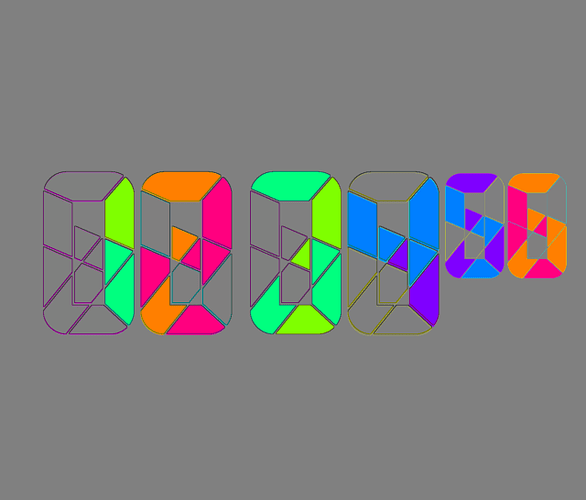 image640×546 41.4 KB
I think it’ll look better if the hours had one foreground color, minutes a second and seconds a third.
1 Like
next page →